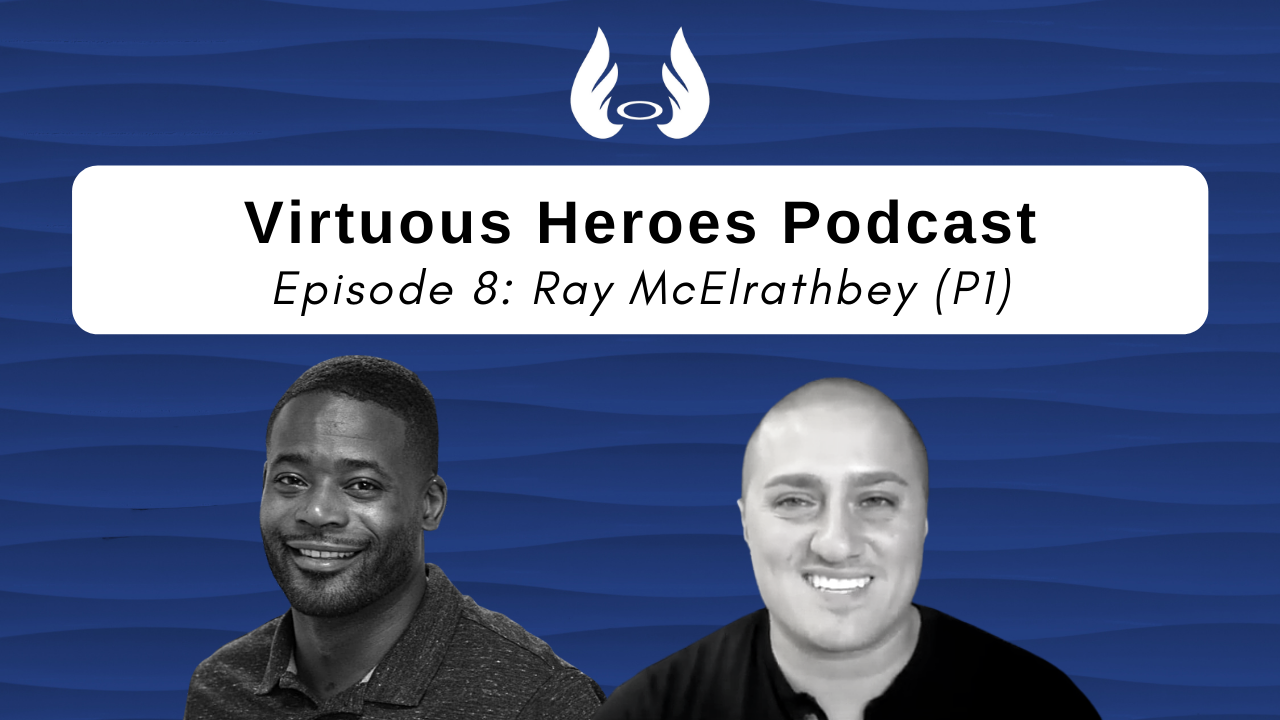 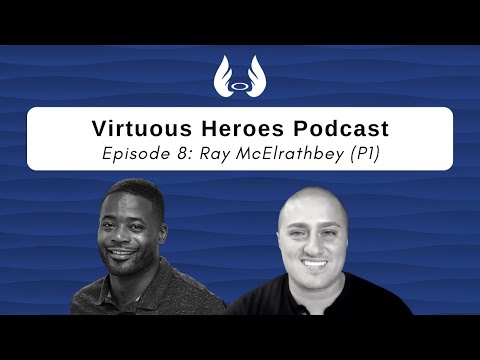 This week’s episode features Ray Ray McElrathbey whose life story was made into the Disney film, “Safety.” Ray’s story teaches the virtue of perseverance.

In this episode, Ray shares with Chris about his unstable and rough upbringing, and how in college he was able to succeed on the football field while simultaneously raising and taking custody of his younger brother. His wisdom to those suffering through hard times is, “do not let your present circumstance determine your future. Understand you are in a moment of time and all things come to pass. You have to wait it out and ride it out. If you have faith, lean on God to get you through it.”

With this thought process, Ray was able to find the courage in choosing family above everything despite jeopardizing his scholarship and future as an NCAA DI athlete at Clemson University.

Through his personal and work experiences, he was motivated to establish the Ray Ray Safety Net Foundation. The Foundation seeks to provide children who are dealing with trauma with a ray of hope through education and mentorship accountability programs.

Hannah: Thanks for watching our podcast here at Spirit Consulting, our services include business strategy and human resources consulting. In HR we offer executive search executive coaching and work psychology consulting. Please visit us at spiritmco.com, where we fulfill our client’s dreams virtuously. Enjoy your show.

Ray Ray: Yeah. Thank you for having me. And I appreciate you taking the time, the west and move in, and I’m glad that you were inspired by it.

Chris: Yeah, absolutely. I will admit that you had both my wife and I in tears throughout the movie. So I just love, I love your story. And like I said, excited to share it with our audience.

Ray Ray: Hopefully it was tears of joy. And and everybody found something great out of that release of emotion.

Chris: So Ray, for our viewers that may not know your story, who are.

Ray Ray:  I go as I go by Ray McElrathbey, simply because of the movie itself. But I’m a loving father, brother, friend, teammate, and anything that most people would need me to be. As far as titles I’m the founder of the Ray Safety Net Foundation.

Safety Freight, which is a freight company moving freight from state of state regional. Just a number of different other things, but no need to discuss at this very moment. But those are just some of the things that make me who I am.

Chris: Excellent. You said that you’re a father, how many kids.

Ray Ray: I have one son and he has a brother, so I have two sons.

So Ray, how did you get to the leadership position that you’re in today? Tell us your story.

Ray Ray: God, God,  I think I was chosen. I’m not like a golden child in a sense, but I like to think of myself as Alladin before Alladin was very popular story. There’s no magic carpet for me, but the diamond in the rough I’ve been through a bunch of different things in life that.

I guess led me to this point and the position leadership position that I managed to find myself in now is just persevering. I think faith and perseverance has got me to where I’m at now. And it’s what I hope to continue to do. Moving forward is to continue to persevere and move and try to accomplish God’s works.

Chris: Amen. So the for those, can you give us like the overview of the, of what you went through with college that the movie Safety highlights in your own,

And he stayed with me on campus and I was a student athlete at Clemson University. It was ironic newsworthy simply because this is my brother and I got custody of him in the, I was playing college football at the time. It was, putting, my family first. At the time, but he came to campus on Clemson university’s campus.

He was supposed to be visiting for a little bit of time and he didn’t want to return back home due to my family situation. My mother was addicted to crack cocaine at the time. And then my father had his struggles with my mom and their relationship. So he was in and out. And so a Fahmarr came to Clemson for a visit and didn’t want to return home.

He actually said he would rather go to foster care, then go back. And it made me pay more attention to, the things that he was going through. Cause I had been through things similar, but I never wanted to go to foster care. That was not one of the things I wanted to do. I think I had previously been in foster care, so it wasn’t somewhere I was trying to be again.

I was at Clemson about my time at Clemson taking care of my younger brother.

Chris: And this was just released at Disney correct?

Ray Ray: Yes. A movie was released on December the 11th on Disney+.

Chris: Awesome. Safety. Yes. Ray Ray. You’re in the movie. They the character that plays your little brother or younger brother is kinda has his quirks and is definitely like a loud personality. Did you find that? Is that how close is that to real?

Ray Ray: Fahmarr within the people that know him, cause I would classify him as an introvert unless he knows you. And then he’s that bubbly kid that you’re seen in a movie cause around my teammates, my brother understood. And as well as me, that he was in a safe place. So he could do whatever you want and acting in a manner of be a kid.

And before that it wasn’t necessarily the case. So what the gentlemen plan, my brother around the people that my brother knew around my teammates. That’s how he was. He was a very precocious individual, but as. Thadius the young gentleman that played him. He’s actually that way all the time. Cause he’s a, he’s more of an entertaining.

That’s just it’s either when he first meets you he doesn’t meet any strangers and he’s a great kid and he did a wonderful job playing my brother.

Chris: Excellent. Thank you. Thank you for sharing. Our audiences. The executives that I built my career on as a consultant for the last 15 years.

And they may not have to go through some of the hard living that you and your brother had to go through. Growing up with, what the movie shows as gangs and drugs. But they may be fighting, some dysfunctional cultures where people speak negatively against each other, whatever, the, whatever the negative culture that they may be in.

I’m just curious, as you mentioned that, you had to go through the same thing that your brother went through. It wasn’t really documented in the movie, but how did it, you fall into. That type of lifestyle, which so many, unfortunately, don’t have that kind of like discipline to stay away from.

Ray Ray: I did, I fell into the lifestyle and through grace I was allowed to only. Visit the lifestyle as opposed to live it out there was times in my life while I was doing things that I didn’t have no business doing. I was kicked out of elementary school in the fourth grade for bringing a knife to school and just being ignorant, just being crazy young man lost as I would say.

So I stayed with my ten and under football coach. And then I stayed with my AAU basketball coach, and I spent some time with my high school principal then. So I moved around a lot and luckily I found the right people to help me out and steer me in the right direction. Because as a young kid, I was lost.

It wasn’t that I was a bad kid at heart. I just didn’t, as some people will say, how can you, not force a kid to do wrong when there’s a lock on the right door? And so the right door for me were lock. There were, there wasnt an opportunity there, there wasn’t things that I could take advantage of this.

The wrong doors were always open. And so it’s easy to travel down those roads. So for what I would say to people who have known these trials and tribulations in their life, understand that when you’re going through it, it might seem like the worst thing that ever happened. And a lot of things in my life that I went through initially felt like some of the worst things that have happened to me, me getting kicked out of elementary school at the time could have been one of the more worse, the worst detriments thing that could have happened to me.

And most things are like that. Just people were classified as finding the silver lining. But there is a silver lining, there’s always some good that can come out of a lot of these things. A lot of the situations that you’re going through, you just got to find it and hone in on it and in, in work towards that, as opposed to everything else that’s going on.

Chris: Yeah. I find that you know exactly what you’re saying, Ray that our major life sufferings are ultimately promotions. If we we have the ability to to be patient and to just continue to keep doing the next right thing and just working hard through it. So thank you for sharing that. Cause I, I really think that your life is just that story of it, of don’t get don’t allow the suffering to, to basically ruin you.

Ray Ray: It is not who you are. Don’t let it determine your future. Cause I understand you’re in a moment of time and if we know one thing about time, if it does pass, so all things do come to pass. So you just gotta wait it out, ride it out in a sense. If you have faith and you believe in God and you can lean on God and you can lean on your faith in order to get you.

But just know every day is not a good day, but every day it’s not a bad day as well. And understand that there’s a balance in the world and the energy that you put out, you will get back. So try to live the best life that you want.

Chris: Hey, Chris here. Hope you enjoyed the episode where we discussed all things going bald, just joking, the Leading Virtuously Podcast. If you enjoyed the episode and the podcast, will you please subscribe on YouTube or Apple Podcasts or Spotify, or you can also share it with a friend that would be tubular. I hope you have an awesome day.